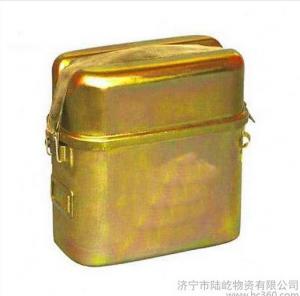 Delivery Time : 5-10 days after your payment

ZH60 isolated type chemical oxygen self-rescuer is used in places of various toxic gases or oxygen-deficient. Wear self-help for personal use, when coal mining sites occurred gas and coal dust explosions, fires and other natural disasters, as a self-help instrumentfor workers to escape . It should be noted that while the chemical oxygen self is a self-rescue device, oxygen that wearing personnel needed is provided by the self-help supply and is isolated from the outside world.

1, the instrument carries:
The rescuer is carried in the miner belt, belt wear a belt loop in the lower crust, usually carrying on the right or left side of the waist miners.
2, wear step
⑴, open rescuer: red with thumb and index finger to move the hand until the seal pull strip off, the entire sealing tape off, put on the shell broke away.
⑵, rescuer pulled the body: to seize the headband and wrapping the body of the self-rescuer pulled out from under the shell, unplug the oxygen candles start off, start oxygen generating oxygen candle, organize balloon to expand it.
⑶, unplug the mouth with stopper: the red mouth with a plug, unplug the tool from the mouth, and pay attention to the side of the headband should be in a balloon, rather than the distributor side.
⑷, with the mouth into the mouth: Requirements placed on the rubber mouth piece between the lip and teeth, lips close to the mouth piece around the teeth Yao Zhuya pad, ensure breathing air with the outside world cut off.
⑸, rescuer pulled the body: to prevent nose breathing ambient air, the nose clip broke his hand, pinched nostrils, the nostrils closed well, this is the wearer can use self-help to breathe, safe evacuation of disaster areas.
⑹, wear and tension headband: take off the cap miners, wearing headband, adjustable at both ends of the tape loop length and relax, adjust the headband to a proper position. Hand pull tape ends, so that the rescuer firmly headband worn on the head. Requirements mouth with overly oppressive articulate, headband overly oppressive skin, then put on his hat, rapid withdrawal of the disaster area.

ZL60 filter self-rescuer is suitable for mines that coal dust, gas and carbon dioxide are prominent.As mine personnel personal respiratory protective devices, it is used to prevent CO poisoning, so it must be carried, ready for immediate use.
Meanwhile, the rescuer also apply to: (a) a variety of tunnel excavation and underground work processes hypoxic environment escape; (2) the concentration of oxygen in the ambient air is not less than 18%, CO concentration of less than 1.5%, excluding other use of poison gas in the air (3) only for personal use escape.

(1) After wearing filter,the below vision is not less than 40 degrees.
(2) using the desiccant should be consistent with the provisions of MT868-2000 requirements.
(3) The catalyst (catalyst for oxidation of carbon monoxide should meet the requirements MT869-2000).
(4) using dust carpets, dust effect.
(5) filter with saliva baffle to prevent saliva flow bottles of medicine.

Thank you! Your message has been sent to the following suppliers.